Ray and I got to hear our first creation speaker about thirty years ago. He had been reared by parents who were atheists and was himself part of an organized atheist group. When, in his early twenties, he decided to write a book to debunk the Bible, his study had a different result. He became a devout believer. He spent his career as a geologist and a high school science teacher in public schools, spending weekends traveling the country speaking about evidence of God as Creator of the Universe.

The subject of Christian evidences is a passion of mine. I love to see or hear about something amazing in the world and rejoice in the marvel of it. Here’s a bug I saw on my porch the other day. Don’t tell me he just evolved. I don’t believe a word of it. 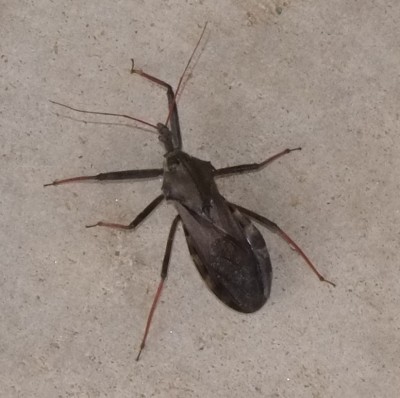 Same goes for this bug hugging a piece of rice we saw recently (No, he wasn’t in my kitchen. Some of the grandchildren were playing with rice outside.) . . .

. . . or much less all the creations in this scene.

During the last several months, I have witnessed evidence against random chance and for a designer with a plan in my very own home. When our Room Above the Kitchen (affectionately known as the RAK) was left to random chance, i.e. Ray and me putting things there when they came into our home when Mother moved in or when we rearranged things during a round of home improvements, this was the result.

Ray and I don’t have the power to speak the words, “Let there be order,” and then watch something wonderful happen like God can. However, we are made in His image. Therefore, we can make a plan and execute it. It takes us lots longer and we have to work really hard at it, but He created us so that we can do it.

I have never seen order spring from chaos, but if you read or see something that suggests that your amazing child evolved randomly after millions of years in which millions of amazing accidents happened, try this experiment. Leave a just-weaned puppy in a room with a laundry basket full of clothes, an open box of cereal, two place-settings of china, a ball of fuzzy yarn, and a pitcher of red Kool-Aid®. Come back in an hour, assess the situation, and then leave for, oh, say, two months or two years.

Hm-m-m-m. I don’t think order is going to spring from that chaos, not even if you waited, oh, say, about two million years.

When Ray gets sleepy mid-afternoon, he sometimes takes a short nap to revive. We had a napping visitor yesterday afternoon and Ray was wondering where to go to take his brief siesta without awakening our guest. “You can take it in the RAK,” I joyfully suggested. Hooray for uncluttered beds in an uncluttered room.

For since the creation of the world His invisible attributes,
His eternal power and divine nature,
have been clearly seen, being understood through what has been made,
so that they are without excuse.
Romans 1:20