Last night as Mother, Ray, and I walked into the house after church, I poured the rest of my glass of water into the pretty mum my friend Olive gave me. 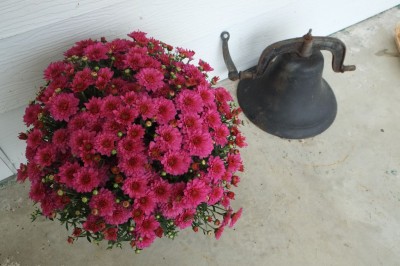 I rarely do something like that without thinking about our friends Garth and Terry. Many years ago Garth worked in a basement office where he kept a philodendron. Terry told me back then that it stayed alive even though all Garth ever did was give it an occasional dousing with . . . Let’s see was it Coke® or Dr. Pepper® or Pepsi®?

When John, Bethany, and Mary Evelyn were growing up, Ray and I used to hear about the need to spend quality time with our children. Spending quality time with children is a great idea, as long as that quality time is accompanied by lots and lots of quantity time, too. You know, like when you sit in your house and walk by the way and lie down and rise up (Deuteronomy 6:7).

Children don’t thrive with an occasional dousing. Jesus knows that we don’t either. That’s why He gives us rivers.

Now on the last day, the great day of the feast,
Jesus stood and cried out, saying,
“If anyone is thirsty, let him come to Me and drink.
He who believes in Me, as the Scripture said,
‘From his innermost being will flow rivers of living water.’”
John 7:37-38, NASB