I grew up in the center of downtown Ashland City, Tennessee, right in the midst of all 2,000 of us Ashland Citians. My granddaddy’s store was behind us. My school was in view to the left and across the street was our family’s church. I spent many fun times riding my bike in the parking lot and on the sidewalk of our church. It was there that my Daddy first taught me to ride. I pedaled while he walked beside me, holding onto the back of the bicycle. I remember the day that he let go and I kept pedaling. I could ride my new blue bike all by myself!

When someone rides a bicycle, he is constantly moving slightly from left to right, making adjustments in order to stay upright. Being bicycle repairmen by trade, inventors Orville and Wilbur Wright knew a great deal about bicycles. They used their knowledge to help them know how to make an airplane stay in the air.

As Ray and I listened to a presentation at the Wright Brothers Memorial recently, the park ranger told details about how Orville and Wilbur Wright used their experience with bicycles to help solve the mystery of how man could fly. They developed a system of pulleys and cables that made them able to adjust their airplane’s wings in much the same way that a bird adjusts its wings and a person adjusts a bicycle.

On December 17, 1903, the Wright Brothers knew that weather conditions were favorable and hoped that this would be the day that one of them would be the first man to fly an airplane. They called together some of the local men who assisted them in their experiments, giving one of them the job of operating the camera. He had never taken a photograph before. When the flight was successful, this novice photographer wasn’t even sure that in his excitement he had remembered to squeeze the bulb. It was not until the Wright Brothers returned home to Ohio and developed their photographs that anyone knew whether this volunteer had been successful in his once-in-a-lifetime opportunity. He was. The photograph is one of the most famous ever taken.

A sculptor has recreated the scene of the first successful airplane flight, including the novice photographer at the moment of his once-in-a-lifetime opportunity. 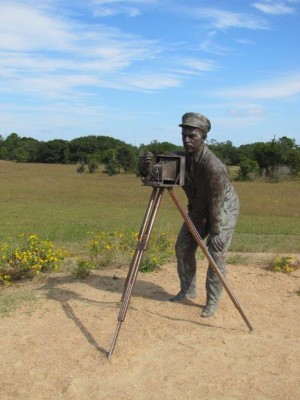 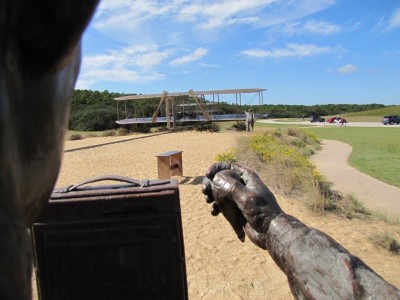 Are there things in your life that you haven’t yet gotten right? Do you have uncertainties about certain aspects of your homeschool? Aren’t we thankful that once-in-a-lifetime chances to succeed are not the norm? Most of our lives are much more like riding a bicycle. We have to make adjustments.

Jesus taught a parable about two sons. The first son made an adjustment.

“But what do you think?
A man had two sons,
and he came to the first and said,
‘Son, go work today in the vineyard.’
And he answered, ‘I will not’;
but afterward he regretted it and went.
Matthew 21:28-29