Ray and I were in Duluth, Minnesota, last weekend for MACHE, which stands for Minnesota Association of Christian Home Educators and is pronounced like paper mache, which reminds me of one of my favorite homeschool activities ever — the pink paper mache pig piñata John, Bethany, Mary Evelyn, and I made one year for Valentine’s Day. But I digress — as usual.

We left for MACHE a week ago today. I drove to Rockford, Illinois, that day while Ray worked on his revision of Exploring Government. Along the way I took this shot on an Interstate entrance ramp at Mahomet, Illinois. Illinois skies are beautiful.

The next day I drove to the Minneapolis-St. Paul airport where we picked up Donna, our new convention assistant. From there, we headed far north to Duluth on the shores of Lake Superior. I was excited to get to drive the entire 1,051.7 miles myself — with the help of a Dickens novel on audio!

We drove our Suburban over to the convention center about 3:30 on Thursday afternoon to get our booth ready for the convention on Friday and Saturday. A welcome group of volunteers was on hand to help us unload and get our mountain of boxes to the booth. Then, as always, we looked at our space and made decisions about the exact arrangement of our booth.

Of course, we have many basics down pat and don’t have to decide on everything every time, but there are many variables from convention to convention. Where is our booth located in the vendor hall? From which direction will parents come into the hall? Is this booth exactly twenty feet by twenty feet? Where is the best spot within the booth to put the tall sign so people can see it from far away?

Still, while we were making decisions last Thursday, I wondered aloud as I have so many times before: “It’s not as if we haven’t been doing this for seventeen years!”

After we made all the decisions and got the booth just like we wanted it, I took some photos and emailed one of them to our children with the subject line: Booth 170.

Here’s the text of the email:

We’re trying a new booth arrangement this time: 2 U’s, plus a giveaway/DEHM [that stands for Daily Encouragement for Homeschooling Mothers] island, and a double pay station island. It feels incredibly spacious. I’m calling it Booth 170 because this is our 17th season on the road. I figure that if we have averaged 10 shows per year in those 17 years, this must be booth arrangement 170!

When Wilbur and Orville Wright invented the airplane, they used principles they had learned from their experience working with bicycles. You know the saying people use when they talk about being able to pick right back up doing something after they haven’t done it for a long time: “It’s just like riding a bicycle.” Well, it may be true that once a bike rider, always a bike rider, but Wilbur and Orville knew that when people ride a bicycle they are constantly making adjustments. Nobody who sits stiff and unmoving on a bicycle ever gets very far without falling off. Bicyclists are a very wiggly bunch! You have to wiggle through adjustments to keep upright.

This is one of those times in a homeschooling mama’s year when you think about making tweaks and adjustments. Don’t feel bad because you have to do that. It’s what wise mamas do.

The rewards of making adjustments are many. When we get our booth “just right” — that is, for this one convention, knowing we’ll have to make tweaks for the next one — we get the real reward, which is getting to visit with homeschoolers. Sometimes homeschooling mamas or their children want a picture with the folks who wrote their history book. When that happens, I often get my camera and ask for the same privilege in return — with assurance that I won’t use the picture for anything other than showing my own kids. When I gave that assurance to a mama last weekend in Duluth, she responded with, “Oh, you can use it!” I was delighted and decided to show it to you. Moments like this, when I get a glimpse into the lives of students who use our curriculum, are precious rewards for the joy-filled work we do. 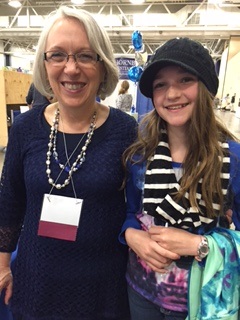 Happy adjusting for the rewards God has given to you.

Behold, children are a gift of the Lord,
The fruit of the womb is a reward.
Psalm 127:3