On Saturday I took two of our grandchildren to Granville, Tennessee, for the annual day-long Christmas celebration. We met a friend of mine, a fellow “retired” homeschooling mama whose children have graduated, for part of the day. I have to confess that I got a little case of cold feet before we left. Ray was going to stay home for a day of quiet and also to be with Mother. For the first time, I was about to take two preschool grandchildren on an all-day outdoor outing, a half-hour from home in a town with near-non-existent cell phone coverage by myself. Could I handle this? Sure, I used to do stuff like that all the time, but it’s been twenty-seven years since I was the mama of little, little people.

This kind of cold feet is unusual for this go-getter who has been a right-in-the-middle-of-things-because-I-don’t-want-to-miss-anything kind of girl since I was little — just ask my mother and my husband. Just the other day I was making a decision and said to Ray, “Sometimes I think I can’t do everything.” He grinned at me, put his hands on my shoulders, and said, “Charlene, you can’t do everything.” Well, there’s a window into my personality, if there ever was one.

Of course, I shook off my fears and went anyway. I was greatly rewarded. What a — in the words of Winnie-the-Pooh — “grand day out.” We had a blast and I came home exhilarated, feeling better at the end of the day than I had at the beginning.

Our first stop, after the inflatable slide and bouncy house (yes, of course, I went down the slide!), was the Christmas concert performed at Granville United Methodist Church, the only church in Granville — attendance last Sunday – 11, attendance the Sunday before that — 35. I’m telling you: this town is tee-nincy. The church is immaculate, well-cared for, and wonderfully decorated. Light streams in through beautiful stained glass windows. 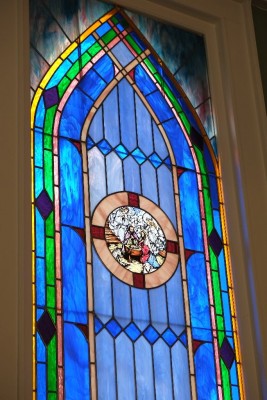 A choir of eleven with seven women and four men, plus a talented soloist, sang their hearts out for their annual Christmas concert. As always, the concert included songs interspersed with Bible readings, poems, and stories. The theme for Granville’s Christmas celebration this year was “Glitz and Glitter: A 20s Christmas.” I was surprised during the welcome and introduction to the concert. The announcer talked about the decade of the 1920s, the first decade after World War I, which was supposed to have been “the war to end all wars,” and the first time in American history when more people lived in cities than in the country. He spoke of short skirts and bobbed hair and of conflicts between liberal theologians and fundamentalists.

Living in a family where history is almost as much daily fare as breakfast, lunch, and dinner, I had heard about all of that before.What I hadn’t heard about before were the differences he mentioned between an urban Christmas in the 1920s and a rural one. He said that people in American cities sang of Santa and snow and winter, while rural Americans continued to sing about the Baby of Bethlehem. Then, he told us that they were going to be like the rural Americans and sing about the Baby.

I don’t believe that there is something inherently evil about cities or inherently wholesome about the country. Evil and wholesomeness are issues inside human hearts. I tell you this story and stories like them so that I can share good news with you. While many people were throwing off traditional values in the 1920s, some people were holding tightly to the Baby born in Bethlehem.

Following the 1920s history introduction, the concert began. Some songs were traditional and familiar, while others were contemporary and unfamiliar to me. One of those songs told of Gabriel telling Mary not to be afraid.

Mary had every reason to be afraid from a human point of view. Imagine telling Joseph her news or telling it to her parents. You know how scary pregnancy can be. Imagine carrying the Son of God — talk about not wanting to mess things up! Imagine rearing, as your first born child, no less, the Son of God most high.

And yet, Gabriel said:

Do not be afraid, Mary; for you have found favor with God.
Luke 1:30

So have you. Do not be afraid.