My friend Jo, whom I have told you about several times before (sometimes by name and perhaps sometimes with a pseudonym) is an amazing person and a constant source of encouragement for me. When someone has a love for God and a heart for service, they can turn most anything into a ministry. Jo does that with everything!

Jo is her husband’s companion. For the last thirty years, they have been collecting waterfall adventures by trying to take every waterfall trail available in the Smoky Mountains — and this is just one type of their many shared adventures.

Jo is a goal setter. Before she and Gary celebrated their 50th anniversary a few years ago, she set a goal to get back into her tiny wedding gown so she could wear it at their party — and she did.

Jo is a faithful friend. She has maintained many friendships for decades.

Jo is a singer. She sings at church, she sings in the community chorus, she sings at funerals, she and Gary host a singing every year at Christmas time — on the birthday of the oldest member of the quartet she sang with for many years, because, as I said, she is a faithful friend.

Jo is a faithful daughter and sister. I can’t count the times she has told me stories about growing up in her family, headed by her deeply faithful mama and daddy. Just yesterday she told me that she and her sisters always have a big celebration on the 4th of July to carry on the tradition started by her parents. A few weeks ago she told me about how people in their community used to seek out her dad because “he had wisdom.”

Jo is a hair stylist and, as I have also told you before, it is one of her many ways to minister. My mama always tried to look her best, but since her stroke, that has become harder and harder for her. About a month ago, she and I started going to Jo’s every Wednesday morning for Jo to style her hair in the old-fashioned way that your great-grandmothers used to do in the mid-twentieth century.

Jo had asked me to bring her a photo of the way Mother used to look when she looked like herself. On the first Wednesday we were there, Jo cut her hair. Then she did a treatment that took the yellow tinge out of Mother’s hair, again making it the beautiful white it has been for twenty  years. Then she rolled it on tiny rollers and set Mother under an old-fashioned dryer. Then she combed and teased and combed and teased and sprayed.

Now every Wednesday, Jo does all the steps except the cut; and she continues to experiment with making it beautiful. Every night Mother sleeps in a soft nylon bonnet of sorts and every day she looks beautiful. Here she is fresh from Jo’s Beauty Shop yesterday. 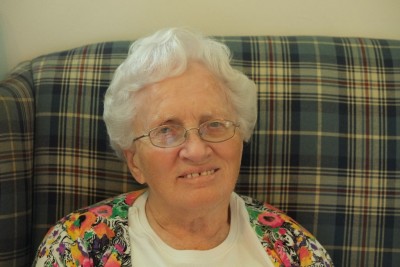 While Jo does her masterpiece on Mother’s hair, she chats with me about whatever is on her heart. Yesterday she talked about prayer. Without mentioning anything about her specific opinions politically, she told me that she and her husband are praying every day that, in the upcoming election, Christians will reveal to America the power of God.

Jo and I remembered the decades when the Iron Curtain separated Eastern and Western Europe. We talked about our amazement when it came down. Jo remembers hearing men at church pray over and over and over again that the wall would come down. They prayed persistently; and after decades, it fell. Jo actually went to Russia on a mission trip not long after the fall and taught the gospel to people on the other side.

As Mother and I headed out the door, another lady was coming in. I guess the main purpose was hair, but she was already telling Jo about her health before we got out of earshot. I don’t wonder whether Jo blessed her. I just wonder how.

Let’s join Jo and Gary in their prayer. In the upcoming election, may Christians reveal to America the power of God. Meanwhile, we can do that every day with those around us, just by finding ways to make everything a ministry.

For the eyes of the Lord are toward the righteous,
And His ears attend to their prayer,
But the face of the Lord is against those who do evil.
1 Peter 3:12