Yesterday I started to tackle the much-needed job of going through the stacks of this and that on my desk. I came across a note I had jotted down at church one Sunday soon after the last Homeschool Dramatic Society play, “America!”

My notes were from a conversation about the play with our friend Gary, who had been to see it. “America!” told the story of individual immigrants who entered America through the Ellis Island immigration station in New York Harbor. Dialog came directly from interviews with immigrants who had come to America from Hungary, the Netherlands, Sicily, Italy, Russia, Spain, Ireland, Greece, Ukraine, Armenia, France, Poland, Germany, Scotland, and Iraq. Our daughter Mary Evelyn chose to share interviews that expressed an immigrant’s faith in God and/or their patriotic feelings about America, believing those were messages that people need to hear right now.

On that Sunday morning, Gary offered his congratulations. He said it was a fantastic job. He noted the research and said that he appreciated that it informed. He noted that the play was patriotic. He said that he believes that was a needed emphasis.

Either our daughter Mary Evelyn and her family were out of town that day or they weren’t yet at church. I don’t remember now, but I jotted his praise down, so that I could share all the details with her.

Meanwhile, the note languished on my desk. When I saw it again yesterday morning, I transcribed it into an email to Mary Evelyn. When I finished the email, I thought about what a great lesson there is in what Gary did that Sunday morning. Detailed compliments nourish the heart of the receiver. They are powerfully affirming.

One of the nice things about my being able to tell Mary Evelyn about Gary’s praise for her play was that it tells her that he felt his praise so much that he spoke his thoughts to a third party.

Adults and children alike appreciate hearing praise and appreciation. We like knowing that someone else noticed the details of our efforts and appreciated the results. We like to hear someone tell other people what they think that we did well.

God knows absolutely what His worth is. He knows Who He is. He doesn’t need our affirmation. However, He still wants to hear our detailed words of praise and appreciation. He wants to know that we noticed.

God also knows that we need affirmation, too. He has provided the perfect affirmation to give to your children. It is the one He gave His Son: “You are My beloved Son; in You I am well pleased” (Mark 1:11).

Think of the book of Psalms. In many psalms, the psalmist speaks praise to God directly and then switches abruptly and talks to the person reading the psalm. It’s as if the psalmist is having a conversation with two listeners at the same time, speaking first to one and then to the other.

Psalm 104 is an example of this. The psalmist praises God in detail, mentioning many of God’s specific amazing deeds. He expresses praise to God Himself and also tells other people about what God has done. The psalmist even begins the psalm speaking to a third listener—himself.

Bless the Lord, my soul!
Lord my God, You are very great;
You are clothed with splendor and majesty . . .
He lays the beams of His upper chambers in the waters;
He makes the clouds His chariot;
He walks on the wings of the wind . . .
You covered it with the deep sea as with a garment;
The waters were standing above the mountains.
They fled from Your rebuke,
At the sound of Your thunder they hurried away.
Psalm 104:1, 3, 6-7

I can envision a similar conversation in a family. Mama finds Tim cleaning up his room without being asked. She says to herself, “Well, look at that!” She says to Tim, “Wow, Tim, I am so proud of you. You have put away your PJs. You made your bed. You cleaned up those cookie crumbs. You turned off the light in the closet. I am so impressed. Thank you.” Hearing Daddy coming down the hall, she calls out, “Honey, look what Tim did. Look at his bed! He put away his PJs. He cleaned up some crumbs . . . and he did all that without being asked!”

Pleasant words are a honeycomb,
Sweet to the soul and healing to the bones.
Proverbs 16:24 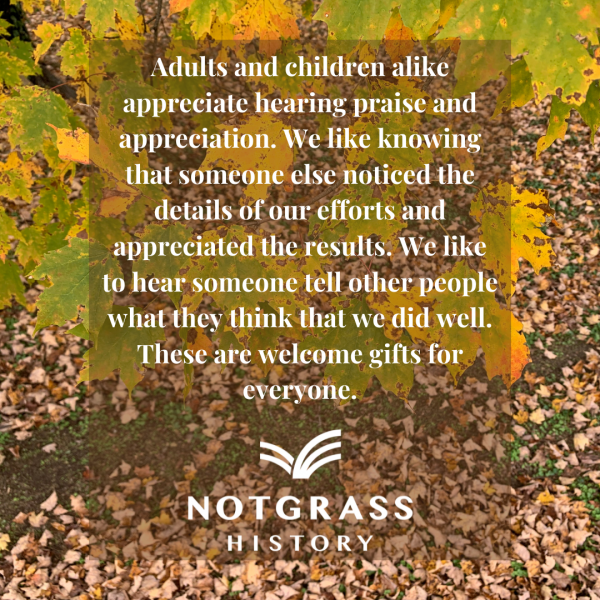