A highlight of any trip to the maritime provinces in eastern Canada is Prince Edward Island–one of the most beautiful places God has created on earth. This was Ray’s and my second trip to PEI. Our first was in 1999 when our family drove there for our daughter Bethany’s senior trip when she graduated from homeschool. That time we entered the island province by driving across the Confederation Bridge. This time we had a completely different perspective on the Confederation Bridge. We saw it after we left Prince Edward Island, when we sailed under it. But, I jump ahead of myself. We need to go to Prince Edward Island first . . .

This time we arrived by ship and landed at the port of Charlottetown. 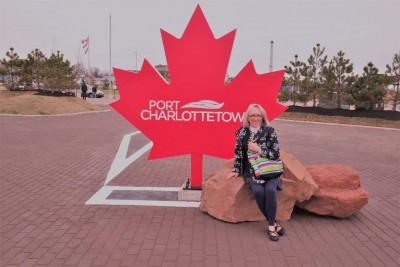 We rented a car for the day and drove toward L. M. Montgomery’s Cavendish National Historic Site to see the home that inspired Lucy Maud Montgomery to create the setting for her novels about Anne of Green Gables. The north shore . . .

. . . of Prince Edward Island is dotted with lighthouses. We stopped at this one along our way.

As we continued toward the national historic site, we topped a hill and looked down at this pretty lake. We landlubbers from Tennessee wondered what was dotting the lake. 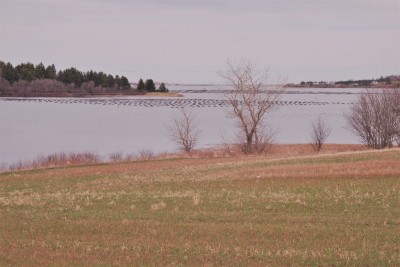 When the man in the pickup truck in front of us pulled off to the side of the road, we stopped to ask him what they were: oyster traps. He showed us his tool for catching oysters . . .

. . . and I peeked in the back of the truck and saw his own haul of oysters.

We also stopped by this small village.

On Monday I plan to take you on a tour of Green Gables, but first I’d like to talk about how Lucy Maud Montgomery preserved her legacy. First, of course, she wrote her books. For her setting, she chose a farm owned by her grandfather’s cousin which was a short walk from her own childhood home where she lived with her grandparents. After Lucy’s mother died when Lucy was just two years old, her father left her with her grandparents and moved to western Canada. This is the typewriter Lucy used for her writing. I had to take the photos through a glass case, so the pictures aren’t very good; but I thought you’d like to see it. 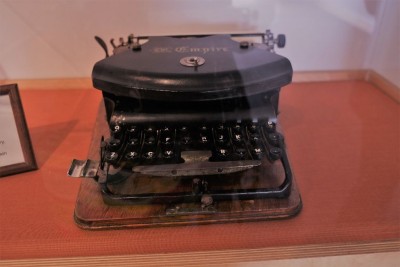 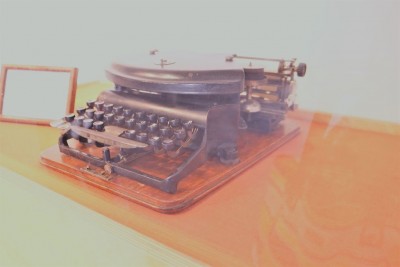 About the home of her grandfather’s cousin which became home for Marilla and Matthew Cuthbert and Anne Shirley, Lucy Maud Montgomery said:

“. . . I have woven a good deal of reality into my books. . . . Green Gables was drawn from David Macneill’s house, now Mr. Webb’s–though not so much the house as the situation and the scenery, and the truth of my description of it is attested by the fact that everybody has recognized it.”

Lucy Maud Montgomery enjoyed great success as an author. Efforts to preserve the home and farm that inspired Green Gables began during her lifetime. Mrs. Montgomery was involved in the process of preserving the site and had strong opinions about how that would happen. It was very important to her that the memorial not be commercialized. Her desires have been honored in the national historic site Canada maintains there.

You are writing your own legacy every day in the hearts of your children. Just as Mrs. Montgomery was proactive in assuring that her legacy would be an honorable one, you are doing the same. Congratulations on a job well done.

This is what God said about the patriarch Abraham’s legacy:

For I have chosen him,
so that he may command his children
and his household after him
to keep the way of the Lord
by doing righteousness and justice,
so that the Lord may bring upon Abraham
what He has spoken about him.
Genesis 18:19