In the spring of 1863, the Union Army began to hammer the city. Eventually the Confederate Army and the citizens of Vicksburg were caught in a crossfire of the Union Army from the east and the Union Navy from the River. Union soldiers planned their efforts in make-shift offices like this one, recreated in the Vicksburg National Military Park Visitor Center.

The civilians of Vicksburg retreated into underground caves, similar to this one, also recreated in the Visitor Center.

The Battle of Vicksburg lasted forty-seven days and ended when the Confederates surrendered on July 4, 1863.

In February 21, 1899, the U.S. Congress established Vicksburg National Military Park and directed the Secretary of War to mark the battle lines. The act also authorized the states, both northern and southern, which had been involved in the Battle of Vicksburg, to erect monuments and markers in memory of their soldiers.

On the misty morning of July 27, 2016, Ray and I began a self-guided driving tour of the park when we entered through the Memorial Arch. 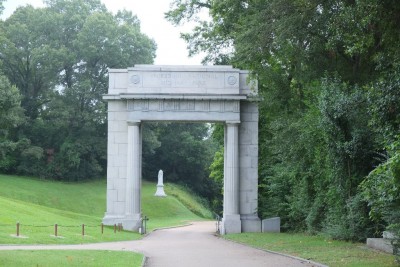 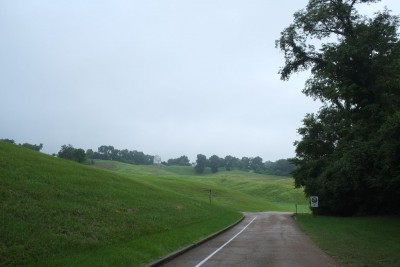 Some of the earthworks prepared for the battle remain. 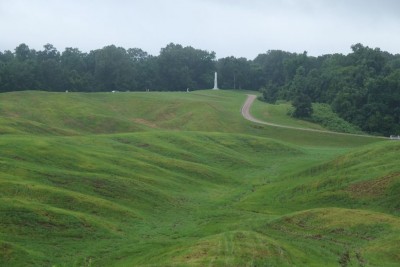 I’ll share a few of the monuments placed there to remember both Union and Confederate soldiers and sailors who participated in the battle.

The USS Cairo, a Union ironclad gunboat, and a museum with artifacts from the vessel . . .

. . . sit near Vicksburg National Cemetery. Both are along the driving tour.

The monument below reads:

COMMEMORATING THE SERVICE
OF THE 1st AND 3d MISSISSIPPI INFANTRY REGIMENTS,
AFRICAN DESCENT AND ALL
MISSISSIPPIANS OF AFRICAN DESCENT
WHO PARTICIPATED
IN THE VICKSBURG CAMPAIGN 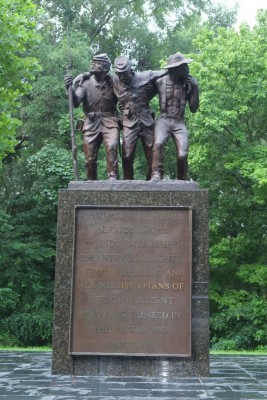 As we got about one-quarter of the way through our tour, Ray and I talked about how very special America is. In what other country in the world would there be a park with monuments from both sides of a civil war? Where else would the winning side allow the losing side to set up monuments at all, much less right there in the same park?

By the time we reached this monument from Arkansas, . . . 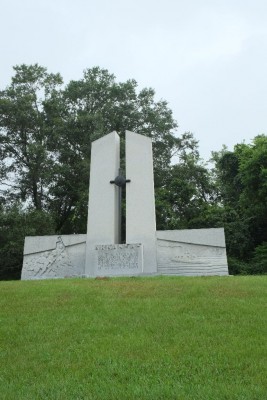 . . . we had seen a magnificent equestrian statue of General Ulysses S. Grant . . . 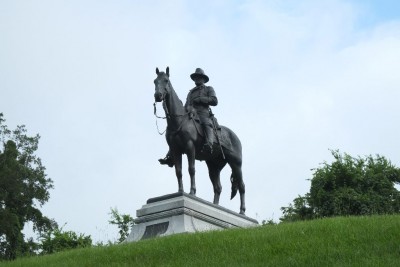 . . . and soon we would see this statue of Confederate President Jefferson Davis. 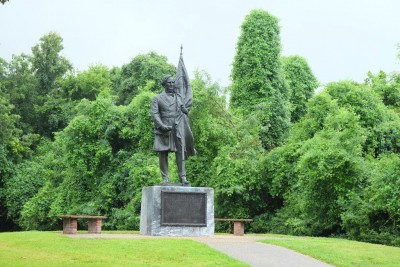 The Arkansas monument honored the Confederate soldiers and sailors of Arkansas, but it also spoke of a reason for the nation’s reconciliation. It reads: 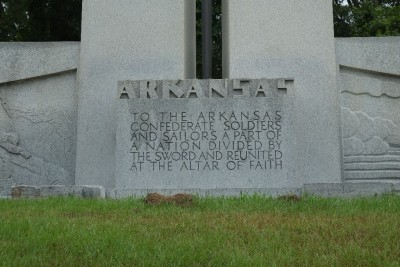 During the time we lived in Illinois (1985-1993), I visited in the home of a family whose ancestor had fought for the Union in the Civil War. A Union sword hung on the wall in their den. While I was visiting, the father of the family pointed out to me that the sword might have killed one of my ancestors.

While it is true that the statement was rude, unkind, and unnecessary, it would be wrong for me to make it a dividing wall. People can make anything a dividing wall. When Congress authorized Vicksburg National Military Park in 1899, they saw past divisions. We need to follow their example today.

For all of you who were baptized into Christ
have clothed yourselves with Christ.
There is neither Jew nor Greek,
there is neither slave nor free man,
there is neither male nor female;
for you are all one in Christ Jesus.
And if you belong to Christ,
then you are Abraham’s descendants,
heirs according to promise.
Galatians 3:27-29