I had a bittersweet experience a couple of weeks ago when I attended the funeral of our cousin Phil. He was in his early 70s. Phil was the son of my great-aunt, the sister of my grandfather, Daddy Leland. Her name was Christine, but as the only girl in a family with six boys and no other girls, we all called her Sister.

Phil was one of my heroes when I was a young girl. He and his brother Marvis Boyd (we all called him by both names to distinguish him from his daddy, Uncle Marvis) were brilliant and handsome teenagers at a high school in Nashville. Sister was the principal of one of the elementary schools in our county. Uncle Marvis taught at a school in Nashville. They were part of a church where Jim Bill McInteer was the minister. How my daddy loved Brother McInteer. His teaching and the way he lived his life for many, many years while he cared for his wife with dementia has made Brother McInteer one of my personal heroes.

My great-grandmother Mama Boyd made up the rest of Sister and Uncle Marvis’ household.

Phil was athletic and completed his Master’s degree at Peabody. Marvis Boyd was a gifted speaker and singer, and he completed a law degree. All of us expected Phil and Marvis Boyd to use their talents and opportunities, but neither of them lived in the way any of us expected. In fact both of them had deep struggles.

Phil found a quiet, life occupation as a driver which gave him hours of opportunities to do what he loved so much — learning. As the long distance driver of an eighteen-wheeler, he listened to audio books. As a taxi driver, he read books. His hobby was collecting books.

One thing I admired so much in both Phil and Marvis Boyd was the deep love they had for Uncle Marvis and Christine. I have never known more devoted sons than they. Their parents died several years ago and Marvis Boyd died in an accident about a decade ago. This left Phil as the only member of his immediate family. He didn’t keep up with his many cousins and he was hard to contact. Occasionally I was able to get in touch with him and sometimes he would accept my invitation to come and visit with us. Our visits always left me feeling so good and, oh, how I miss his baritone voice with that lilting touch of humor that was almost always just below the surface.

Several weeks ago I was surprised to hear his voice on our answering machine after we had been out of town. I called him back and was amazed that he answered. This was not typical at all. Mother and I were able to visit with Phil a couple of days later, and, as always, he made us both feel special, and, as usual, he talked about his mama and daddy.

Phil was so hard to contact that I had worried what would happen if he died and whether anyone would know. When I learned of his passing, I wondered who would be at his funeral, but he had everything planned out and relatively new friends made sure that it happened according to his wishes.

Ray, Mother, and I were the first to arrive at the country church where I got my New Testament award Bible when I was a toddler and where Granddaddy Gabe and Mama Boyd and Mama Boyd’s parents, and many other of my relatives are buried. A few other cars began to arrive and we strangers began to gather under the tent for Phil’s graveside service. 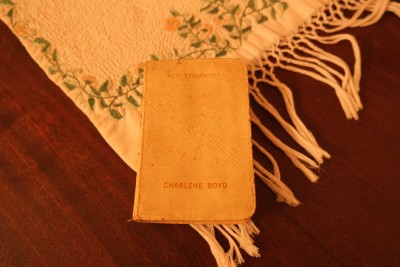 One of Uncle Marvis’ nieces and her husband told me who they were and we chatted together. I met a few others of his friends. As the remaining two dozen mourners gathered, I wondered who we all were. I thought how sad it was that I didn’t know these people, so I just went to the front of the little group and told them my name and what my connection was to Phil and asked each of them to do the same.

Some were friends of recent years. One was a friend of only a few weeks. Another owned the taxi company where Phil had worked for thirty years. Several were friends from Phil’s high school. One had played basketball with him and one had been his high school sweetheart — for six years. Beside her was a friend who didn’t know Phil but who had come to support his former girlfriend.

The gathered folks told of a kind man who never lost his temper. They told of a friend. I was very glad I asked.

A minister whom Phil did not know spoke kind and comforting words and reminded us all of the time many years before when Phil put his faith in Jesus and was baptized into Him.

Then Phil was buried beside Uncle Marvis, Sister, and Marvis Boyd.

I have since learned that Phil left generous gifts to a Christian college, to a charity that cares for animals, and to the church beside the cemetery so that they will be able to maintain the cemetery for many, many years to come.

What is man, that You remember him?
Or the son of man, that You are concerned about him?
You have made him for a little while lower than the angels;
You have crowned him with glory and honor,
And have appointed him over the works of Your hands;
You have put all things in subjection under his feet.
Hebrews 2:6b-8