A few weeks ago, I told you about our attending “Brooke’s” graduation. Last night Brooke and her parents and our daughter Mary Evelyn and her children joined us for supper (Mary Evelyn’s husband was helping a friend move, so he joined us much later). After supper Ray noticed a rainbow in the eastern sky, just where we have seen rainbows several times before. We all went out on the porch to look.

At first the rainbow was faint, just a wisp near the ground on the left and another on the right. Still, we were glad to see this breathtaking phenomenon. While we stood admiring on the porch, the rain began to pour heavily. After that rain, a dazzlingly bright, full rainbow appeared, spreading broadly from hill to hill–so broadly that I could not get back far enough to photograph the whole rainbow from the porch. Beside it was another rainbow, which you can see faintly in this photo.

I was struck by how excited we all were just standing on the porch last night. It was touching to hear all the exclamations: “O-o-o, look!” “It’s so bright!” We were excited about light in the sky, beautiful light made by the hand of God. 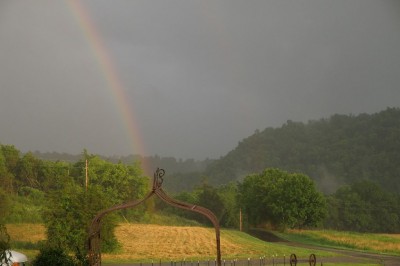 The first and only time that the rainbow is mentioned in Scripture is in Genesis 9 when God said:

I set My bow in the cloud,
and it shall be for a sign of a covenant
between Me and the earth.
It shall come about,
when I bring a cloud over the earth,
that the bow will be seen in the cloud,
and I will remember My covenant,
which is between Me and you
and every living creature of all flesh;
and never again shall the water become
a flood to destroy all flesh.
Genesis 9:13-15

We each have something much better than a pot of gold. We have the promises of God. May we be like Abraham:

. . . fully assured that
what God had promised,
He was able also to perform.
Romans 4:21

But now [Jesus] has obtained a more excellent ministry,
by as much as He is also the mediator of a better covenant,
which has been enacted on better promises.
Hebrews 8:6