On a recent Sunday afternoon Ray and I stopped at a restaurant in Cookeville, Tennessee, as we made our way home after a trip out of town. Because our schedule was packed that day, I took Ray’s big blue plastic portfolio inside with me. While we waited for our food, I got a head start on the blog post for the next morning.

Near our table was a kiosk where a young waiter was working. As we walked past him after lunch, he asked me if I were writing a book. That began a discussion about Ray’s and my work.

When the young man found out that we write about history, he asked me, “What’s your favorite war?” I told him kindly that I didn’t like any war. That’s when the young man switched from talking about a favorite war to telling me that he likes to learn about the Vietnam War.

We are mamas, you and I, and I’m sure you feel the same way I do. I appreciate my father who served in the military during the Korean War, my father-in-law who served in World War II, and every other person who has ever served honorably to protect and defend people whose lives were endangered by an aggressive person, group, or nation. However, in my opinion, the words favorite and war don’t go together in the same sentence.

In 1987, when we were living in Urbana, Illinois, Ray and I took John, age 8, Bethany, age 6, and Mary Evelyn, age 3 out east. We did lots of fun things and we also went to Gettysburg and Valley Forge. Noticing Bethany Beach, Delaware, on a map, we decided that was a perfect place to take our Bethany and her siblings, so we pitched our tent there for the night.

As we looked for the best route home, we noticed that Washington, D.C., wasn’t far out of the way and decided to swing by there for just an hour or two. We had just enough time to see the Washington Monument, the Lincoln Memorial, and the Vietnam Veterans Memorial.

As we stood at the wall, tears flowed from my eyes. Having just been to Gettysburg where Americans had fought in the Civil War and to Valley Forge where they had fought in the American Revolution, this thirty-three-year-old mother of three stood weeping before the Vietnam Veterans Memorial and thought, “We haven’t learned anything.”

I know now that I was wrong. We have learned a lot — just not enough.

Last Friday night after we finished the day’s hours at the Homeschool Expo in Chattanooga, Josh, Ethan, and Ray and I drove up and up to the top of Lookout Mountain. Here’s a view of the mountain from the Walnut Street Bridge in Chattanooga. . . 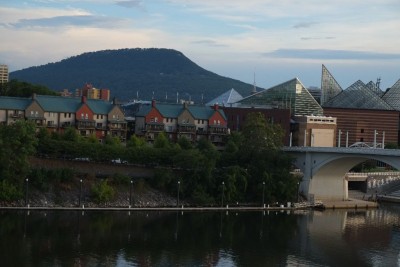 . . . and here’s a view of Chattanooga from atop Lookout Mountain. 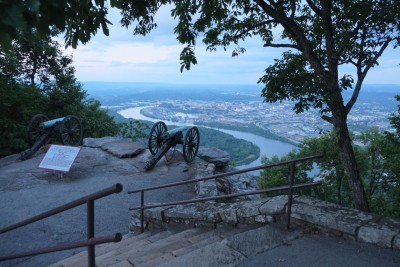 And here’s a view of my historian husband explaining the Battle of Lookout Mountain to Josh and Bryan . . . 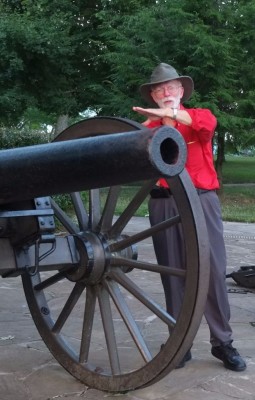 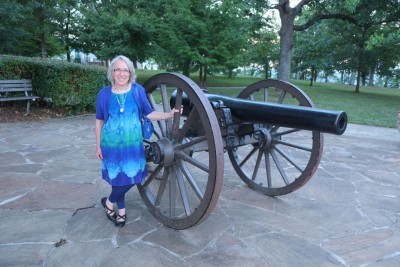 I pray that God gives you and your family a day of peace today.

Then the Lord spoke to Moses, saying,
“Speak to Aaron and to his sons, saying,
‘Thus you shall bless the sons of Israel.
You shall say to them:
“The Lord bless you, and keep you;
The Lord make His face shine on you,
And be gracious to you;
The Lord lift up His countenance on you,
And give you peace.”‘
So they shall invoke My name on the sons of Israel,
and I then will bless them.”
Numbers 6:22-27