As Ray and I drove away from the hotel and toward the glass repair shop, we passed this lake. The kayakers were real, but I have a feeling the Loch Ness Monster was a fake, don’t you?

We were surprised when that girl who talks to us on our cell phone navigation device directed us to a quiet strip mall and we found a Glass Doctor sign on a locked door. We were just about to write a note and put it on the door when a mama and two children drove up, got out of their car, and headed toward the door. “Had to pick up my kids,” she said, as she opened the door for us.

We entered a waiting room where she sat down at her desk while her children scuttled off to the room her boss has designated as a play area for the receptionist’s children and for her own. 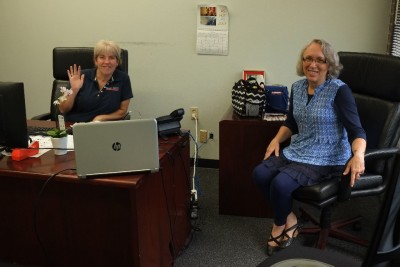 The receptionist was busy with one customer after another — emailing, answering voice mails, answering the phone. Each of those callers got the same reassuring message I had gotten when I called them earlier that day: “Glass Doctor. We fix your panes.”

In between she told me about her children and grandchildren and even shared her heart about mothering. While kind and not judgmental, she wondered why people choose not to have children, asking, “Who do you give your heart to?”

On her desk was a beautiful orchid, given to her by one of the glass repairmen. She told me how touched she was by his thoughtfulness, especially since he was a young man.

Ray headed through the shop in the back and into the hot, hot sun to watch the repair work. He got to see a master glass worker who has been doing this for thirty years and got to share an encounter with a man who exuded his love for Jesus. 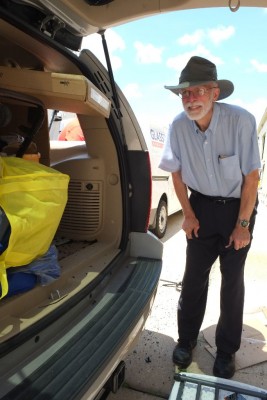 Ray and I marveled at how this part of our trip, which could have been a real downer, was such an uplifting blessing. The repairman told us that he hoped the person who stole our things did it to feed his family. He told us that he had lost one hundred pounds and that when people ask him how, he says, “Him!” He pointed upward as he said it. He said that God gave him the strength to do what he should and the wisdom to know what to eat.

God can certainly turn any mess into something sweet.

“For I know the plans I have for you,” declares the Lord,
“plans to prosper you and not to harm you,
plans to give you hope and a future.”
Jeremiah 29:11