On rare occasions I open one of the graphic design emails that come to my inbox. Recently I read advice from an expert who recommends that designers go to flea markets, antique malls, or garage sales. He said they should look at things that are real and experience things that are real. Poor guy. I’m surrounded by real stuff every day, aren’t you?

Actually his advice is great homeschool advice. Here’s a possible student to-do list for the next few days or weeks (of course, every mama knows which of these is age-appropriate for her real child).

Read a real book with real paper pages you turn — with your whole hand, not just one finger.

Write a real letter — on stationery — in cursive.

Have a conversation — in person, as in face-to-face.

Make music. Bang a drum with a wooden stick or a pan with a spoon or a piano with real fingers.

Play a card game or a board game — sitting around a table with real people who are sitting there, too — as in with you in the same real room — that you can touch.

Welcome the next person who comes into the house with a smile, a hug, and hands that are empty, i.e. free of anything electronic.

Count the stairs in your house or the steps from the front door to the bathroom.

Pick flowers and make a bouquet. 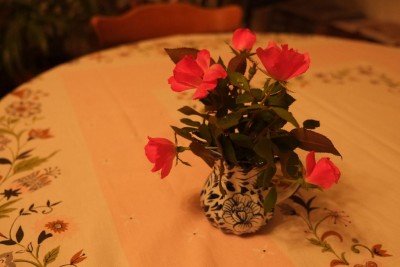 One night the apostle Peter was asleep between two soldiers. He was bound with chains. Guards were in front of the door.

Everything that happened was real, but Peter didn’t know it was real. He thought he was seeing a vision.

First Peter and the angel passed the first and second guard.  When they got to the iron city gate, it opened for them by itself. Together they went along one street. Then the angel left.

It was at this point that Peter came to himself and knew that what was happening was real. The Lord really had sent an angel and rescued him from Herod.

Peter went to the house of John Mark’s mother where many were gathered and praying for Peter. Peter knocked on the real door of the gate and Rhoda the servant girl came to answer the door. She knew it was Peter and was filled with too much joy to open the gate. Instead she ran in and told the others that Peter was there.

They didn’t think it was really Peter at first. Peter had to keep on knocking and knocking. At first they said, “It is his angel.” Finally they opened the door, saw him, and were amazed at the real Peter they saw before them.

Wow! Isn’t it wonderful that God is real and what He does is real!

Who can speak of the mighty deeds of the Lord,
Or can show forth all His praise?
Psalm 106:2