Sometimes when it snowed and we got out of school for a snow day when I was a little girl, my daddy’s daddy, whom we called Daddy Leland, drove me from his grocery store (which faced the street behind my house) to his house (which was seven miles away in the country). Through the decades since, when I have driven north out of Ashland City on Highway 49 toward Pleasant View and passed between the tall, tree-covered hills on the left and the tiny branch on the right, just before the bridge over Sycamore Creek, I have often been a little girl again, sitting in the front seat of Daddy Leland’s truck and riding through the snow to my grandparents’ house.

My mother had white rubber boots when I was a little girl. Each boot had a white elastic loop which she pulled over a white button to hold them tight around her lower calves. Sometimes she wore them and sometimes I did. Still, sometimes I ended up at Mama Sue and Daddy Leland’s house to play in the snow with my just-a-year-and-a-half older Aunt Emily without my boots. Mama Sue would pull two bread sacks out of the broom and mop closet by the back door and slide them over my feet before slipping a rubber band on my ankles to hold them tight.

Out in the snow Emily and I would go until time to come back in for a delicious bowl of Mama Sue’s snow cream.

When I spent my snow day at home in Ashland City with my brother Steve, we sledded down the hill beside our house and came back inside for Mother’s yummy snow cream. One special memory of my childhood was the day that Mother joined us for sledding on the hill.

Neither Mama Sue nor Mother took complete heed to the government warning of the 1960s, born of the cold war with the Russians: “Don’t eat snow cream! It’s tainted with radiation!”

Just as I love Christmas, I also love snow! I still get just as excited as the grandchildren when the beautiful flakes start to fall. And I still tread very carefully so my footprints don’t mar that fleeting beauty. 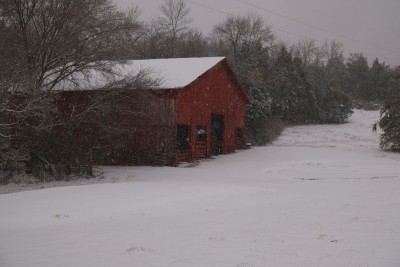 Most anyone who is blessed with the combination of snow and children knows to go sledding and to build snowmen and snow forts. But we can enjoy snow even when the weather outside is not frightful as in “Let It Snow,” but delightful. Here are some ideas:

Make a salt snow scene. I think I showed you my pine cone, ceramic sleigh, and tiny silver bells on a bed of salt “snow” scene from last Christmas: 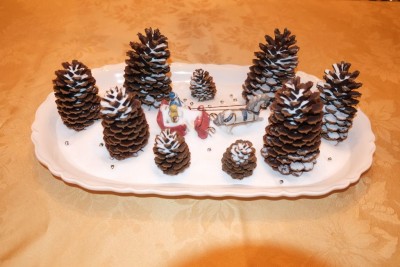 This Thanksgiving our four-year-old grandson and I made a “gingerbread” White House that had been in my freezer since around the 4th of July. I had found this White House cookie kit at Trader Joe’s last summer but never got around to making it for Independence Day, so I put it in the freezer hoping I might have time next July.  I decided instead that with an inauguration coming up soon, it would be fun to have a White House “gingerbread house” for Christmas. We made it in a glass dish and then I sprinkled salt around it for “snow.”

Throw a white blanket (or sheet) over a card table. Voilà! You have a snow fort.

One of my favorite Christmas books this year has been a Little Golden Book from 1964 called Jingle Bells. Kathleen N. Daly wrote the sweet story based on the traditional Christmas song and J. P. (John Parr) Miller illustrated it. The story is fun; the illustrations are really fun. Snow is falling on every outdoor scene that takes place in the daytime. Miller drew the brightly dressed animal characters in vivid colors, placed them before pretty blue, blue gray, or light turquoise skies and then speckled the whole scene with blotches of white so that throughout the book, the cast of animal characters are “dashing through the snow.”

I can think of two ways to recreate this method with children. One is simple. The other is a fun challenge for your budding (and confident) artist.