On Sunday a friend and I reminisced about fashion hemlines when we were girls. Attendees at homeschool conventions are great evidence as to how times have changed since then. I imagine you could find modest hemlines varying as much as a foot or more from one woman to another. This would not have happened when Brenda and I were girls.

At that time fashion dictated the length of a skirt. In a certain year, women learned that a hemline “should” be a certain length, say 1/2 inch below the knee, but the next year fashions might change and the new “right” hemline might vary by an inch or so. Since my mother sewed and did alterations, fashion changes were good for business. Women simply had to have their skirts the perfect length, so they came to Mother to have the hems taken up or let down.

Hemlines don’t matter so much anymore, but our skirts do. Is there anything quite so sweet as a tug on the bottom of your skirt? Is there a safer place to hide than behind Mama’s skirt?

Matthew, Mark, and Luke tell about a woman who touched the bottom edge of Jesus’ clothes. The King James Version calls it the hem (Matthew 9) or border (Luke 8) of his garment; the New American Standard Bible calls it the fringe of his cloak (Matthew and Luke). Mark 5 says simply that she touched His garment (King James) or cloak (New American Standard). The important thing is that through faith the woman found healing by touching Jesus’ clothing. In Matthew 14:34-36 and Mark 6:56, we learn of more people who touched Jesus’ clothes and were also healed.

Sometimes it was Jesus Who did the touching. The result was the same: people were healed. 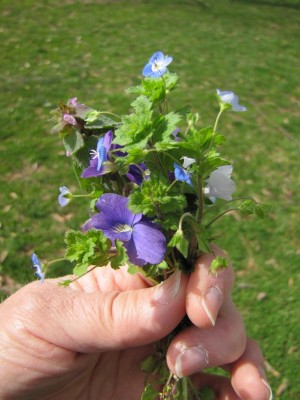 Jesus is the Son of God; His touch was powerful and miraculous. God has given us a different kind of power when our children touch us and when we touch them. Our touch is a force of good for our children. Many of you will read stories today or teach math facts. Some of you may lead your children as they learn about an ancient civilization or a law of science. As you do, cherish the opportunity to kiss and hug and touch.

But we proved to be gentle among you,
as a nursing mother tenderly cares
for her own children.
1 Thessalonians 2:7